(2009: )I have revised Jan-Feb so far, hopefully I will find the time to fix more later! Saturday 30 March 1996
Some tour revisions, and news of Jakob Dylan's coming album.
Drummer Howie Wyeth died.

Thursday 28 March 1996
More tour dates confirmed, including Germany.
I moved the Dylan/cash gif-movie to the BobVideo page. I also hope to put in counters for some pages starting April 1st.

Monday 25 March 1996
It gives me great pleasure to announce that the highly respected Dylan magazine "The Telegraph" is on line from my site! You are welcome to step in and have a look.

Sunday 24 March 1996
I am testing a programme that lets me set up a chat and discussion forum on the Web server. I have no idea whether this will be useful or not.
If you want to try it out, please go to: http://bob.nbr.no/interaction (May or may not work - it's a test!)

Saturday 23 March 1996
I cleaned up some errors here and there. Thanks to Andreas G, you are now able to get to the Eulogy for EDLIS Agent Ben Ryan, and the links on the Dylan on the Internet page to Grains of Sand and DylanWEB, Bob Dylan: His Life and Work, 1964-1966 are correct.
Today the wife, I and one kid, Greg, went to a motorcycle show in Mosjøen. She bought saddle bags for her new bike, and we ate at Frank's.

I cleaned up the format of Guitar tunings, added material in the Atlas for Highway 61 and Red Wing, linked up Paul Williams' December 95 review to other December dates and discovered that part of Thad Williamson's reviews were obscured by HTML mistakes. So, go to the 1995 list and select Dec 17th.

Friday 22 March 1996
Well, HWY61-L is now giving us news that Bob will play soon, and some flames have turned into apologies, and many realize how important the list was to them. Me, I have made preparations for collecting 1996 concert setlists and reviews.

Wednesday 20 March 1996
They now say Bob will play Portland, Maine in April, and tickets go on sale this week.
I put Durango into the Atlas. More on the Never-Ending Band and people who played with Bob in concert. Look at the top of the Who's Who list! And then there is the great thread on guitar tunings started by Andrew Mullins!

The Cynthia Gooding interview is where you can hear (well, in this case, read) Bob spinning his myths about his past.

- Yes, the 5 minute radio interview went OK, they played "Blowing In the Wind" as intro and outro. I told them I don't write much myself, but thanks to people on the Net, there's a lot to find out about Bob and his music. People from more than 60 countries have visited "Expecting Rain", although about 25 countries make up the frequent visitor list.

Monday 18 March 1996
Just rumours about a possible tour...
Tomorrow morning at 0720 CET I will be interviewed by phone on local radio (Nordlandssendinga P1). What shall I tell them about Bob, the Internet and Expecting Rain? I'll think of something.

Sunday, March 17, 1996
1 - HWY61-L has stopped. HWY61-L was the mailing list mirror for the usenet newsgroup rec.music.dylan. Many of us are now sadly missing this forum. I want to thank Maureen for all her efforts to keep the list working all this time! A replacement list owner is urgently required, please contact Ben Taylor if you can help. It may be necessary to find a new home site for the mailing list if HWY61-L has ended permanently..
2 - A little more on Jakob and Jesse Dylan in the Who's Who. I placed links to Bill Parr's Slow Train Coming site on the Dylan On the Internet page and the EDLIS Agents page. The Video page now includes a link to a QuickTime player for UNIX on Sun. Soon I will test out the gif-movie format, which will play a small movie as a gif in many browser windows. Check back soon!

Saturday, March 16, 1996
1 - Our local newspaper, Rana Blad, printed an interview with me on March 16th. I tried using table formatting on this. Please tell me if it gives your browser trouble!
2 - here are new UNofficial CD titles and T-numbers.
3 - The Atlas entry on Redwing has been added to.

Wednesday, March 13, 1996
1 - I updated my page about this server, and added some boasts on the Reviews page about how this site has been mentioned in newspaper articles, both here in Norway and in the US!

Wednesday, March 6, 1996
1 - I made a small change on the front page, redesigned the defunct front page (this is the one listed on the Highway 61 Interactive CD-ROM, so I cannot abandon it)
2 - and sorted out the Dylan on the Internet page.
3 - I included ann Alta Vista search link AND a form to search the HWY61-L Archives, all at the bottom of the Dylan on the Internet page.

Saturday, March 2, 1996
1 - I brought my old video camera outside to document the HUGE amount of snow we have to cope with here at Båsmoen, Mo i Rana, Norway. It took me less than an hour to make a small film clip and place the 587 K QuickTime video clip and an 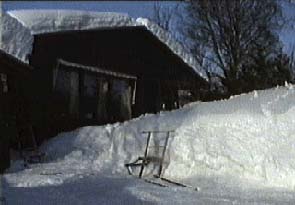 image from it on the Web.
2 - If you are looking for Dylan content, I have a link to Anders Gustavsson's new GRaiNS oF SaND Dylan Web site on my page Dylan On The Internet.

Thursday, February 29, 1996
1 - So much on The Freewheelin' Bob Dylan Outtakes, I have split it in those three parts, at: UNofficial CDs - T-304 on the T-list.
2 - More chart information.
3 - Blind Willie McTell has gained a foothold in the Who's Who. Meant to justify the link to an interpretation of the song of the same name.

Tuesday, February 27, 1996
1 - I don't think I have mentioned that several people have done some good research into Dylan's chart performance.

Monday, February 26, 1996
1- The Freewheelin' Bob Dylan Outtakes is an UNofficial CD. LOTs of information on this one (and many others) at: UNofficial CDs - T-304 on the T-list.

Thursday, February 22, 1996
Not much has been happening for a while, also I have had the flu, and have been in bed for two days. Things are looking up, however, and there has been some interesting material on the highway61 mailing list/ rec.music.dylan newsgroup. (That's where the good stuff comes from, you know!)
1 - DEEP Beneath the Waves Vol 26 is under UNofficial CDs
2 - A great story from the Fort Collins Hard Rain concert in 1976.
3 - The Atlas would never be complete without the Royal Albert Hall. Now it's there, and we're one step closer.
4 - The Who's Who now will tell you about Finley, of Finley's farm. Remember the song?

Wednesday, January 31, 1996
1 - I have the pleasure of inviting you to the official opening of the Web cartoon "Dylans Downloaded", story by Sandra H. Ramer, drawings by Marguerita!
2 - Three new reviews from Deep Beneath The Waves: 22 and 23
3 - More chart information.

Tuesday, January 23, 1996
1 - Eleven new UNofficial CDs with Townsend numbers listed (but not reviewed, sorry) in the T-list.
2 - I moved a concert review from 951110 to 951011. You can see where I got confused, can't you? Anyway, this one did not like what he saw and heard, so if you need a different perspective, read it!

Friday, January 19, 1996
1 - The Who's Who has some more on Lord Buckley, Doc Pomus and Winston Watson.
2 - There are no tour news, just rumours. Thanks to Jeff, I have found a concert date from last year that had slipped from the 1995 list. It's May 27 at Laguna Seca Daze, the file was there all along, but with no link to it. And a new EDLIS agent has been appointed, the Food and Drink agent!
I'm back from Luxembourg, where the fog lay so thick, I had to board a bus from Brussels to get there. I went there to attend the Jukebox project meeting, which you are welcome to read about!

Friday, January 12, 1996
1 - First I regret that the server was down for about 16 hours yesterday. It locked up just as I was leaving work for the day...
2 - The Who's Who has additions on Angelina, Jacques Levy and Joey.
3 - The setlists has an added N.Y. Times review of the Dec 11 concert. It can be found under that date. I'll be away around the middle of next week, to Oslo and Luxembourg.

Wednesday, January 10, 1996
1 - In the Dylan Atlas, there is talk about Argentina, Montague Street and Delacroix.
2 - In the Who's Who, Angelina has entered the scene.

Monday, January 8, 1996
1 - Have you heard of Clobal Chat? I suggest you read about it, get it, and then we'll talk on IRC channel #dylan all day!. I have made a Web page on which users with Global Chat installed can just click on a link to launch the chat programme. Get Ready!

Monday, January 1, 1996
1 - Happy New Year!
2 - Dupree has been added to the Who's Who.
3 - A first step in video, offering QuickTime snips, among them the verses missing in the US showing of "Restless Farewell" at the Sinatra bash.
4 - I have revised the list of unofficial CDs, with links to the images I have and to Moe's reviews.
5 - Also, a concert review from 1986.